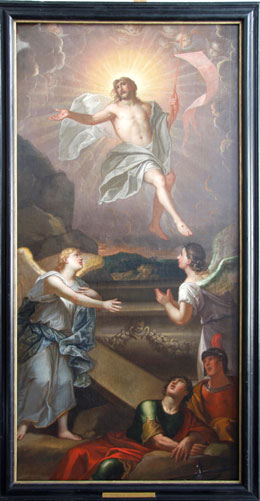 For many years, Sir James Thornhill's remarkable early work, the Folke Altarpiece, spent most of its time in obscurity in Dorset County Museum, only occasionally emerging to be put on display. This was in part because of its poor state of repair but the Museum authorities are now intent on a display of the paintings in their care, come the grand re-opening of the Museum on the completion of its rebuilding and refurbishment. In the face of this eventuality, the decision was made to do some retouching of the picture.

At this point, and in consultation with the Museum and the owners of the picture, Folke Parochial Church Council, the Friends of Sherborne House agreed to provide the financial support needed for a complete cleaning, repair and conservation of the Altarpiece, the which has transformed the appearance of the work.

The Parish Council had for long expressed the wish that one day the painting would hang in Sherborne House and an agreement was made that, once the house had become a suitable place for the display of such works of art, the Altarpiece would hang there. In the interim, however, the Museum, which also contributed money, should have the right to hang the picture for a period of five years. The picture will then go to Sherborne House where it would be an added attraction to visitors.