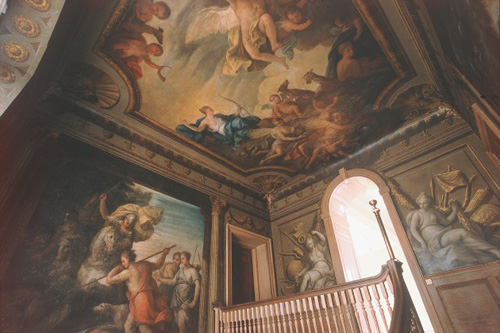 Sherborne House was built by Henry Seymour Portman in 1720. He then commissioned Sir James Thornhill to decorate the staircase though the exact date is not known. The two men already knew one another for Portman, as patron of the College, had paid for part of Thornhill's painting of The Apotheosis of Archbishop Chichele to serve as the reredos behind the altar of All Souls College, Oxford. Thornhill was a Dorset man having been born in Melcombe Regis. When commissioned to paint Sherborne House he was at the height of his career. He had been appointed History Painter to George 1 (1718) and then Serjeant-painter too as well as being elected that year Master of the Painter-Stainers Company. It was the same year that he was knighted, the first English-born painter to be so. In 1722 he was elected MP for the borough of Weymouth and Melcombe Regis and became a fellow of the Royal Society in 1723. He won the two most prestigious contracts of the age - the decoration of the Painted Hall at Greenwich and of the Cupola of St. Paul's Cathedral.

The Technique of Mural Painting

For climatic reasons, north of the Alps dry lime plaster is used (fresco secco) strengthened with animal hair. Once dry, Thornhill's method was to float in lead oxide and when that was dry, to paint directly onto to it in oils in the same way a canvas would be painted.

There are in fact two quite distinct areas of paint. The less important parts were done in grisaille, shades of grey with gilt highlights. This provided the framework that holds the whole work together and gives it unity, while at the same time, being muted in colour; it doesn't take the eye away from what is principal, the three great polychrome panels which compose the other area of paint. These tell the story of the Calydonian Hunt which comes from Roman author, Ovid's book called Metamorphoses, a frequently used source of inspiration for painters at that time. There is actually further polychrome painting on the east wall which consists mainly of red drapery but it is difficult to see except in artificial light and is decorative rather than narrative.

The Story of the Calydonian Hunt

Calydon was in the North-west Greece. King Oeneus, after a series of good harvests made offerings on the altars of the gods but omitted to put anything on the altar of Diana, goddess of hunting. In revenge, she sent a huge wild boar to devastate the countryside. The king's son, Meleager, duly led out a hunting-part that included the beautiful huntress Atalanta and his two uncles Toxeus and Plexippus. Meleager dealt the death-blow with his spear but it was Atalanta who drew first blood with her bow. He therefore gave her the honours of the hunt, the head and skin of the wild boar. The two uncles, outraged that a mere woman should receive such honours took them away from Atalanta. Meleager outraged in his turn, killed first one uncle and then the other. This upset their sister Altea, Meleager's mother. She fetched the piece of wood on which Three Fates had said Meleager's life depended and threw in the fire. Meleager was then consumed by flames and Altea, overcome with remorse, committed suicide.

The Ground Floor: Here the work is all in grisaille. Beside the outside door is a Talbot, an eighteenth hunting dog now extinct, included because it was a supporter the Portman Coat of Arms. Under the stairs is a trophy, consisting of weapons of all sorts, a very characteristic decoration of the time and repeated several times here. There is mini-boar hunt on the side-wall with putti, again very characteristic features of paintings of the time. Either side of the west door, holding back curtains, are two figures modelled probably on drawings by Michelangelo. Before mounting the stairs, note the exquisite inlaid decoration of featuring a Talbot once again and the fine line and workmanship of the banisters. 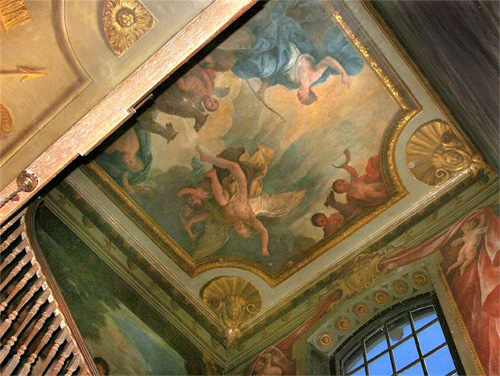 The mural is lit by a single source of light from the east and it is in fact designed to be seen with one's back to the window. Here shadow and perspective are correct. Looking at the mural from this standpoint, note how the grisaille elements hold it all together. There are the vertical Corinthian columns and the horizontal wave frieze and the frieze in the coving at the top (fleur-de-lys and leopard's heads taken from the coat of arms you passed at the bottom of the stairs) complemented by more trophies and other decorative features.

Above you, is Diana, identifiable by the crescent moon of her head, with her hunting companions. Nearest the window is Eurus, (very similar to his depiction in the cupola over the entrance hall of Greenwich) the East wind, chasing away the night star with one hand and the bringing the light of dawn (symbolised by a torch) with the other. 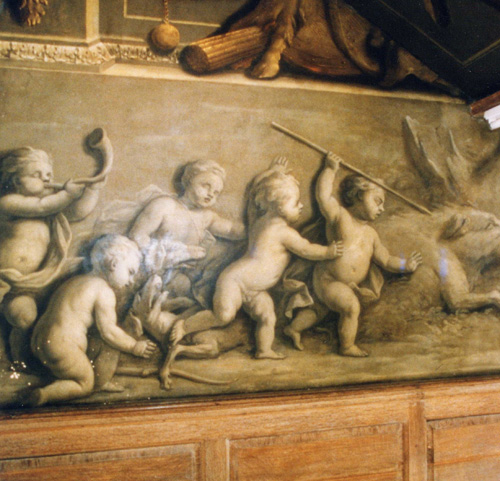 Diana is laying her curse on Oeneus. To your left, Meleager is delivering the death-blow to the wild boar with Atalanta, holding her bow, standing behind him. Mounted at the back are his uncles Toxeus and Plexippus. On the ground is Ancaeus who has been killed by the boar. To the right, Meleager is presenting the boar's head to the seated Atalanta to the displeasure of the menfolk standing behind. There being no more walls left, Thornhill had no room to depict for the tragic ending of the story.

James Thornhill was a Dorset man, born as he was in the borough of Weymouth and Melcombe Regis in 1675. The Thornhull family were gentry, with a Coat of Arms and Manors at Thornhill, acquired 1227, and at Woolland, acquired on the Dissolution of Milton Abbey in 1540. By James' day, the family had fallen on hard times and the Manor of Thornhill had been sold. But he was in any case too far down the line of succession to succeed to any of the property and had to make his own way in the world.

His father having absconded shortly after his birth, he was taken under the wing of his great uncle, the distinguished physician Thomas Sydenham, of the Sydenhams of Wynford Eagle. He it was who left money for his apprenticeship to another Dorset man and distant cousin, the painter Thomas Highmore. The apprenticeship lasted from 1689 to 1696. Highmore was no great artist but at least he taught Thornhill the rudiments of his trade and having acquired the lucrative post of Serjeant-Painter to the King in 1703, did contrive to pass it on to his former apprentice on his death in 1720. 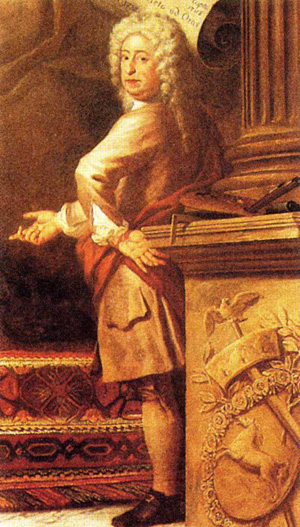 Thornhill probably then worked under the Italian painter Antonio Verrio at Hampton Court but little is known of his activities up to 1704 save that he painted whatever he was asked to do, be it stage scenery, coach panels, religious works and whatever else came his way. The breakthrough came in 1704 when his first two commissions for Thomas Foley MP, and for William Draper at Addiscombe House in Surrey. The first was the Hall and Staircase of his newly constructed country seat, Stoke Court in Herefordshire. This was a very substantial commission that included a whole series overdoors, overmantels, medallions and canvasses in addition to the murals. The second included the stairwell and salon of a grand house built by Vanbrugh. Both houses have long since disappeared. They led onto Chatsworth, Blenheim, Easton Neston and a host of other great houses, but above all paved the way to his obtaining the two great public commissions of the age, the Painted Hall at Greenwich and the Dome of St. Paul's Cathedral.

Wealth followed, and honours galore. In 1718 he was appointed History painter to the King and in 1720, Serjeant-Painter, the same year that he became Master of the Painter-Stainers Company and was knighted, the first English born painter to be so. It was also when he repurchased the family manor at Thornhill and rebuilt the House. In 1722 he was elected MP for the Borough of Weymouth and Melcombe Regis, a seat he held until 1734 shortly before his death the same year. In 1723, he was made Fellow of the Royal Society. 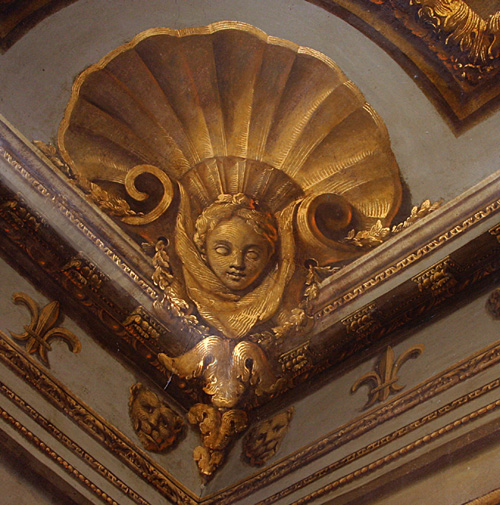 Though wealth, fame and honours came his way, and his work took him to the far corners of the kingdom, he seems never to have lost touch with his native county. His earliest work in Dorset is probably the Folke Resurrection, one of a numerous religious works that he executed. He painted at least four country seats, the Down House and Eastbury Park, both lost, and Charborough Park and Sherborne House, happily both surviving though only the latter is readily accessible to the public. He may also have decorated Colliton House in Dorchester and certainly rebuilt Thornhill House in Stalbridge (he was a distinguished architect besides being a painter). The ceiling painting here alas is lost (although we still have an excellent drawing of what it was once like) but the fine obelisk he built to commemorate the coronation of George II and Queen Caroline in 1727 still adds its elegance to the surrounding country.

Prior to becoming MP for Weymouth, he erected an almshouse there for decrepit mariners, long since demolished, gave the church of St. Mary's a fine painting of the last Supper which is still there and painted the Hanoverian Court of Arms for the Municipality which is now in the Brewer's Quay Museum.

But it is in Sherborne that he is perhaps now best remembered. Sherborne House was built by Henry Seymour Portman as a halfway house between his estates at Orchard Portman near Taunton and at Bryanston near Blandford Forum. Benjamin Bastard is credited with its construction though Thornhill may well have a hand in its design. It Is now a Grade 1 Listed building and that distinction derives in great measure from the mural with which Thornhill decorated the staircase. The House is now in the ownership of the Trustees of Sherborne House Trust 2018 whose aims include making the now beautifully cleaned and restored mural open to the public.